This post will show you how to get a list of users logged on a list of servers (or a specific server) and how to format the output in order to work with it, in Powershell.

Specifically, we will leverage quser, let’s see a quick example on how to query the current user sessions on a remote server.

This is just text however. If we were to assign that result into a variable (with Invoke-Command for instance), it’ll still be unmanageable. We can work with -Replace and with ConvertFrom-Csv in order to get this output to look decent.

Just for the sake of showing every step, the code below will first grab the list of sessions on a remote server and then use the -Replace and the ConvertFrom-Csv.

We’re not out of the woods yet, but here’s how the output looks like now.

I’ve added some color to show you what the problem is at the minute. The output in green is good and it’ll always be good as long as the session is Active. The ones in yellow though have their values shifted up. That’s because SESSIONNAME doesn’t exist and so converting it to CSV shifted all values up.

To fix this, we just need the script to identify all sessions where SESSIONNAME isn’t like “console” and not like “rdp-tcp*“. When this is the case (like in the yellow sessions in the screenshot above), then we need to shift the values and we’re done! So, SESSIONNAME will have to be empty, the ID will match SESSIONNAME, the STATE will match the ID and so on.

The full Script that will handle multiple Servers 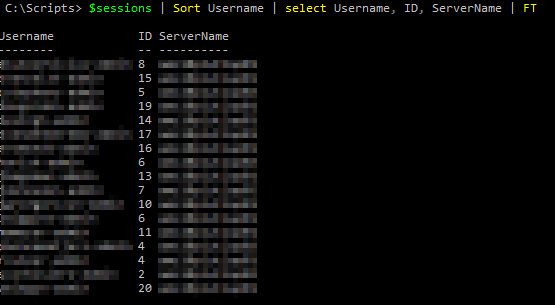